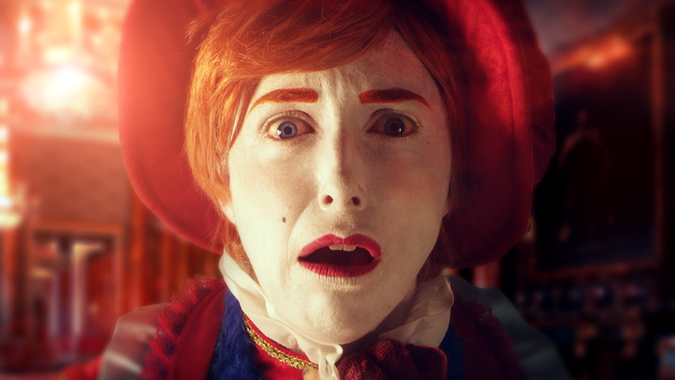 ‘These are the things that are wrong with me,’ says the humiliated and headless Lady Jane Grey in Dodie Bellamy’s short story ‘Lady Jane’ (2006): ‘My gown is white yet I have fucked so many times I’m like the anti-matter of virginal. My hair flows loose around my shoulders, when the proper decapitation coif is hair tied up to reveal a clean neck-target.’ In this catalogue of indexed ‘humiliations’, Bellamy is both character and author, reworking the execution of this nine-day monarch into a tale of academic failure and class-based insecurities: ‘I’m low class, unfamous, unfit,’ she confesses.

There are dozens of ‘Lady Janes’ in the young Scottish artist Rachel Maclean’s Please, Sir … (2014), a two-screen film dialogue recently exhibited at Rowing, London, and previously shown at Glasgow’s Centre for Contemporary Arts. Maclean plays each of the ten or so characters in the film, which are then copied in as extras, involving a meticulous process of disguise and a camp restaging of self. She is multiplied in mega-pixels but overburdened by objects: flowing peroxide wig, rotting teeth with gold filament, fake tits framed by a nylon ruffle, a market stall necklace that spells the word RICH. Maclean’s Lady Jane – more pub landlady than failed scholar or real life sovereign – also wears a sleazy white gown, complete with all the necessary leopard print: the anti-matter of virginal embodied.

Like the doomed academic of Bellamy’s story, Maclean’s barmaid Jane has lost her job. She weeps to the imagined interviewer, defending her unemployment: ‘The past two years, since my mum passed away, I’ve been suffering from depression … ’ Maclean collages her scripts from found audio clips, pulped from the ‘poverty porn’ of reality TV shows such as Benefits Street, which frequently star barmaids, the clichéd boardroom language of The Apprentice and the ‘raw talent’ aphorisms pronounced by TV talent show judges. From these transcripts, she weaves a plagiarized but playful world, updating and re-narrating Mark Twain’s tale of The Prince and the Pauper (1881) as a means to comment on the slick, automated language of aspiration. The artist cannibalizes film, television, music and literature, and, in so doing, she exposes the age-old hymn to doing well and beating your origins – of going up the ladder and wearing posh clothes, like Charles Dickens’s Oliver and his Pip, or Twain’s princely pauper – to be a tale true of today’s neo-liberal, fame-hungry cultural economy.

Arguments against the exploitative nature of reality TV have been trumpeted for a while, but Maclean’s bawdy critique of a Conservative-led UK government that has robbed vital services, jobs and education (leaving one of the film’s characters, the Adidas-clad urchin, freezing on the streets) is ambitious in its satirical bite. Maclean morphs from a prince in diamantéd velvet and Union Jack necklace, touting the tourist economy of the patriot, to a Glaswegian pauper in tracksuit rags covering the Artful Dodger’s manifesto for street survival, ‘Consider Yourself’ (from the 1968 musical Oliver!), in an audition for Britain’s Got Talent. The queenly judge falls for his ragamuffin charms: ‘That’s the cheekiest grin I’ve ever seen,’ mimes Maclean to the voice of the show’s Amanda Holden. Adorned with a prosthetic nose (as Holden), or a stuck on beard (as the X-Factor’s Simon Cowell), you might say that Maclean is performing the female grotesque, channeled through pop-cultural motifs.

But, as Maclean lip-synchs to the sampled scripts, it is the film’s use of language – and, more specifically, the language of socio-economic advancement and cliché – that emerges as the work’s most vital and wounding material. ‘At the end of the day, I’m going to be a multimillionaire,’ pipes the masquerading pauper, combining the big talk of the stock trader with football manager-style syntax. With its dubbed dialogue of formulaic one-liners and narcissistic protestations, Please, Sir … documents the changes in our speech patterns when hijacked by the language of the media and workplace. The artist pickpockets employment jargon and mocks it through dragged-up performance. She’s role-playing – we’re all playing – in this economic culture of manufactured narratives and pre-assigned verbal tools. Maclean might be painting a mask on her face, but she’s writing with a mask on too. She transcribes in order to mimic, and then messes about with the script’s order, ever so slightly, as a strategy of carnivalesque critique.

A review of Jonathan Baldock’s exhibition at Chapter in Cardiff, published on the frieze website
Next Review

A review of Andra Ursula’s exhibition at Massimo de Carlo in London, published in frieze, May 2015