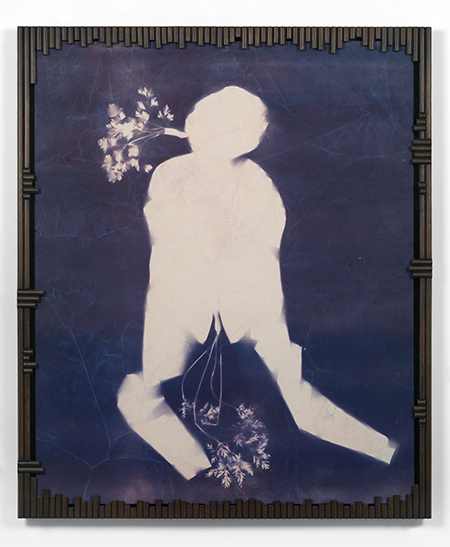 There’s a drinking vessel on the wall. An everyday object, turned into something abject. Its bulbous shape and rope handle make it seem functional, but it has two ends to suck from: at its base droops an Aqua-Resin-painted breast with a nipple on its end. The object is part of a larger sculptural installation by Andra Ursuta, Atrophy Room (2015), in which nine ceramics are pinned up high to the room’s four walls. Their sagging figuration suggests a femininity that is tired of staying in the kitchen.

Part of Ursuta’s ‘Enslavables’ exhibition at Massimo de Carlo in London, Atrophy Room was installed in the basement of the gallery’s Mayfair townhouse. On the two floors above, 15 large-scale portraits of bound or otherwise coerced bodies dominate the gallery walls. The artist used Optium (a UV-resistant Perspex) to produce ‘photograms’ on flocked velvet and, by playing with particular pigments that react to light, her portraits appear as purple and pink X-rays of oppressed and cowering creatures. (We see bones but we don’t see flesh.)

Writing on Ursuta’s practice has tended to begin with biography, but the artist’s Romanian heritage and female subjectivity were both her prison and her power in this exhibition, as she played with the ‘enslaving’ categorizations of the critic. The ball-and-chained figures, as seen in Doppel Chain Ganger (2015), are doubly contained: firstly by the violent apparatus depicted in the image, and secondly by the material surrounds used (and made) by the artist. The hand-carved, undulating wooden frames appear playful in their subversive intent: these are items of stereotypically Romanian rural craft, appropriated by the artist, in order to expose the ways in which the figure of the peasant artisan has been used, framed, packaged and restricted in mainstream cultural depictions. In the similarly abject Pierced Cheeks (2015), we see an androgynous, blindfolded creature with one carrot shoved up his or her bum and another poking from the mouth. With all facial expression X-rayed out, it is impossible to tell if this is an image of pleasure, pain, or both simultaneously: a reminder that Ursuta’s use of slave imagery is rooted in a world of dark desire and perverse excess.

There were clearly narratives being held to account in ‘Enslavables’ – the oppression of a peasant underclass, for instance, as well as of women – but the details of these histories are never made clear, although a hint can be gleaned from the artist’s use of Grobe Deutschmeister – a so-called ‘Jackboot’ font, favoured by the Nazis – in the works’ titles. Perhaps such ambiguities increase the works’ capacity for affect, but I was also left wondering whether such an oblique approach means Ursuta risks falling into the categorizing trap she is looking to critique, insofar as the marginalized are grouped together as one same kind of ‘otherness’.

That said, she has her revenge on the unnamed oppressors in the first room of the exhibition, with a series of twisted silicon penises on cast concrete panels (Keller Boys, 2015) that call to mind the lacerating impulse of Valerie Sonas’s 1968 S.C.U.M Manifesto.

Ursuta’s visual language of abjection is provocative, calling to mind Cathy de Monchaux’s intimately violent (and vulvic) sculptures of brass, leather and velvet. Supposedly feminine/peasant tools of craft are re-appropriated and made violent through images that abjectly exaggerate and fetishize the woman or peasant slave, showing the extent to which archetypes are informed by fantasy. Candid titles such as Slavesitting (2015) remind us that there are no houses to ‘sit’, no comforting domesticity, in Ursuta’s world: only the faceless skeletons of slaves, their gazes a reminder of how much still needs to be done.

A review of Rachel Maclean’s show at Rowing in London, published in frieze, March 2015
Next Review

A review of the Hannah Collins retrospective at Camden Arts Centre, published in Art Monthly, September 2015