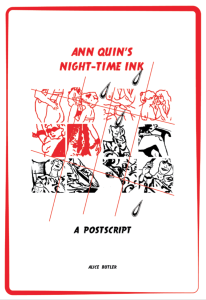 The paper has been stamped ‘confidential’, meaning not quite secret. But technically forbidden. Reading is always about a relationship of trust: I am reading this in ‘confidence’; as I scan these words, they are supposed to remain with me, only me, and yet I am fighting the urge to write about it. There is no martyred author here, only a ghost typist: a spectral sort of secretary. I look at her CV. I read in between the numbers, the signed and dated ‘truth’; I find life in its enumerative grammar. Was she married or single? Single. Number of children? None. Three hundred and seven pounds per annum, typing at one hundred and fifty-five respectively.

On 9th October 1959, she takes up her post as part-time secretary at the Royal College of Art Painting School, after being cleared fit by her doctor. This would later become more tenuous, as her doctor would become more doubtful, mirrored in the note-writing analyst character of Dr. X in the The Unmapped Country, the novel she was working on at the time of her death. ‘I’ve got the pen here. Do you see the pen?’ He questions the patient, waving the phallic tool in her face.¹ She longed for the pen, but was inscribed as record instead; forced to work behind a docile desk, to be made answerable to Sir. Made into ink. Unable to resume duties.

But things happened quickly back then; she was only interviewed on the 8th. She will be answerable to Professor Carel Weight, the ‘e’ making him a ‘he’, unsurprisingly: it is 1959. She got the job off her friend, the novelist Paddy Kitchen; typing for money, but writing at night. No choice but to be a nighthawk for the woman writer. Sylvia woke at dawn to be a writer before wife and mother, typing up Ted’s poems as part of the deal. And Vivienne was Tom’s secretary too, before he stole all her stories and robbed her raw material: before he pathologised her as mad with his pen.² The male writer as the genius/drunk-doctor. But at least the secretary I’m looking at is nudging the 1960s; at least she had a room of her own: she chose ‘single’. In her room at 62 Redcliffe Road, S.W. 10, her door is shut; she is free to write and think, totally singular to herself. Bed, table and chair are all directed to the typewriter.

I think of that photograph of you – taken by Oswald Jones (did he propose to you in the back of a taxi once? No, that was that other writer, your friend Eva Figes) [Fig. 1]. There you are smoking one of those 1960s monochrome cigarettes, caught mid-sentence, talking not puffing, staring at the cracks in the woodchip ceiling: distracted by your own textured thoughts. I think of you surrounded by crumpled end-stops, by failed starts and fag-ashed manuscripts, working on that soon to be published first novel, alone, with your bedsit door closed, scrawling away in fevered singularity, just like Marguerite Duras desires: ‘The solitude of writing is a writing without which could not be produced,’ she writes, ‘or would crumble, drained bloodless by the urge of something else to write.’³ That first novel was named after that painter you obsessed over, Adrian Berg. It wasn’t until late 1962 that you submitted it to the Beckett-publishers Calder and Boyars, desperate to live on more than the £7 a week you were earning at the art school.

Looking at this portrait is like reading the confidential. Following the spiky, slanted angles of her signature, I feel like I almost know her, and I feel the same familiarity when staring at her portrait: that paused, incomplete smile, or staccatoed morpheme, its sound trapped in the photographic chemicals. Decades have passed since her death, and time has rendered her signature unknowable: it has buried her form and face. Six feet under; The Literary Underground. There is purpose in prodding the earth, having a root around, especially if it empowers her ink to speak, and erases his. Words should not rest in peace; they should ignite the present, reinstate restlessness as a fighting form. This is what she did then, and could do now. Can you keep a secret? Because that’s what she is.

A performative essay on the Alternative Miss World event of 1975 that took place in the artists’ studios of Butler’s Wharf, published in the collaboratively produced book, After Butler’s Wharf: Essays on a Working Building (Royal College of Art, 2013)
Next Essay

An essay on memory and clothing, commissioned to coincide with the launch of The Wapping Project Commissions