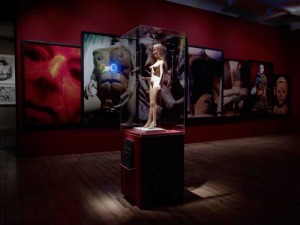 You have to ring the doorbell to get in. The windows have been boarded up, curtains closed. I’m lost in a rectangle of red, a crimson beginning. Pigment pulsing, this bloody palette sends a charge from the gallery to the pavement. The American writer Maggie Nelson would call this ‘chromophilic restlessness’. The gallery is playing dress-up, masquerading as an Amsterdam brothel, or The Magic Toyshop of Angela Carter’s puppet novel of 1967: ‘a dark cavern of a shop, so dimly lit one did not at first notice it as it bowed its head under the tenement above’. The gallery-cum-shop’s red velvet frontage is just as seamy; its facade fakes a corporeal inside. It’s pretending to be that which it is not. (Sex?) There are limits to a transgression made up of bricks and mortar, especially when you have to ring the doorbell to get in.

The red gets even more guttural, more gestural, upon entering this two-roomed den of objects and pictures. A chromophilic neon zoom, a red-light-district gaze. The music from Jacques Offenbach’s The Tales of Hoffman (1881) hums in the background, seedifying the thing with a kind of brazen pastiche. Marionette misogyny is the operatic theme in this exhibition. The neon light is coming from Bruce Nauman’s 1985 wall sculpture Double Poke in the Eye II, fastened to the inside of the exterior wall. It faces seven photographs by Cindy Sherman, her forename a metonym for her doll-like malleability. She has played at being a B-movie heroine, Caravaggio’s Judith beheading Holofernes (in polyester satin), an octogenarian facelift addict and a fairytale creature with a snout. The freedom of drag is to be found in the imagination.

But all this ribald role-play means that her audience are just waiting for the next show; her burlesque black and white past continues to creep up on her present. Her importance as an artist has since been obscured, tarred with the retro brush of ‘Camp’. Sherman’s photographs have become objects of narrative consumption, storytelling curiosities to be sold and packaged in biographical cabinets. The viewer is always looking for the Cynthia behind the Cindy. And you’d be hard pushed to find it here at Sprüth Magers. In ‘Sex Pictures’ (1989–92), Sherman is absent: head and face have been guillotined; the body is an incomplete, plastic effigy. Mannequin limbs have been magnified, rearranged with a knife, distorted beyond recognition. Tools carve and vivisect the cracked-out dummy: a peep-show of the grotesque. On some stages – Carter’s, for example – these carnivalesque characters would represent the ludic overthrow of centred normality. The headless, sexed-up charge of the marginal.

But just because Sherman might have read Georges Bataille once or knows of Morton Bartlett’s secret doll-making – (these artists’ work are used as visual props, a shouty semiotics for the Surrealist perversion supposedly at play) – does not mean that her work has to be placed in such a masculine curatorial frame. If Sherman is to be re-sculpted as a transgressive Surrealist, Bataille, Bartlett, Nauman and Hans Bellmer need not be her automatic parentheses: the work should fight its phallic brackets, and escape. ‘The Vivisector’ is a show that rejects personality in favour of prosthetics; it strains for a revised canon, but that canon is male. It seems as if Todd Levin’s decision to show Sherman’s non-Cindy photographs, the bold move to erase the face and body, has been cancelled out by their masculine references. No amount of red can make it feel revolutionary, or even feminist – Hélène Cixous’s ‘desire for language, for blood’ is a desire for a red writing – when the work seeks justification from a male Surrealist tradition. It renders frigid what made the work anti-normative in the first place; it censors the performative Cindy. The temporal arrangement of this exhibition, its flagrant disregard for autonomous feminist practice, fetishizes Sherman as just another Surrealist’s fantasy. It looks for Cindy’s precedents, all male, rather than her conspirators. I couldn’t help feeling it would be more interesting to see how Sherman and her successors have appropriated Bataille – Nathalie Djurberg’s bestial animations, for example, or 1990s Semiotext(e) authors, such as Chris Kraus and Dodie Bellamy – rather than trademark the show with Bataille’s Acéphale stamp. In the back room is Sherman’s monochromatic series ‘Broken Dolls’ (1999). Plastic figurines have been torn in two, their limbs and genitalia like game-board counters to be moved up, in and around. Passive containers. A doll that resembles ‘female’ is thrown out of her wheelchair, given a push by her husband. Head in the gutter, or so he assumes.

A review of Cally Spooner’s show at International Project Space in Birmingham, published in frieze, January 2013
Next Review

A review of the cross-temporal, group exhibition at Nottingham Contemporary, ‘Aquatopia’, published in frieze, October 2013