The boys, the girls and the political 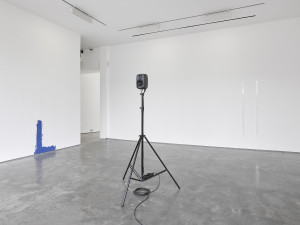 Image courtesy of the artists and the Lisson Gallery, London.

Three smudges of blue pigment have been slapped on the gallery wall like a punctuation mark. Dotted around the two spaces of the Lisson Gallery’s group show The boys the girls and the political, curated by Hana Noorali and Lynton Talbot, these blue markings (mixed to copy the colour of Facebook) indicate our daily surrender to the instant message, while also acting as symbols that encourage ‘conversations’ between the works exhibited. Ten contemporary artists – working in film, performance, painting and sculpture – are featured in this somewhat chaotic show, whereby artists’ work is sporadically staged throughout the exhibition, forcing relationships between them in their untagged anonymity and thematic attachments.

Facebook Blue Filler (2012-present), by Am Nuden Da (comprising Adam Gibbons, Lewis Ronald and Jesper List Thomsen), reminds me of so many writers’ and artists’ obsession with blue: from Carol Mavor writing of Irène Némirovsky’s handwriting in Blue Mythologies (2013) (‘blues are miniscule mournful knots of ink’) to Maggie Nelson writing of da Vinci, Cornell and Jarman in Bluets (2009) and naming them her ‘blue correspondents’. For these artists, blue is light, hope, death and affect. It is affective writing. Am Nuden Da replaces such authored emotion with deadened dots that suggest the inexorable, digital need to communicate, as labour and intimacy become uncomfortably intermixed.

The show suggests ‘collaboration’ as its uniting curatorial thread, but this is misleading: only Am Nuden Da, and Edward Thomasson and Lucy Beech, with the enjoyably banal sex-soundscape 7 Year Itch (2015), are showing works that have been made within a genuinely collaborative framework. Instead, ‘collaboration’ is present in the exhibition in much looser terms; such as the way Cally Spooner’s sound piece And as the medieval cloisters connect seamlessly with the corridors of power… I’m quietly confident (U-Turn) (2013) was developed by the artist, composer and chorus-line.

‘Correspondence’ is a more effective lens through which this exhibition should be read, both in terms of the works’ metaphorical conversations, and in terms of writing – or rather the ‘act’ of writing. From the short fictions given to Elaine Cameron Weir’s brass sculptures as titles, to Spooner’s email-interrogation Questions for Kevin (2015), distributed as an A4 hand-out, the works that foreground ‘language-as-performance’ begin to form a separate message thread of their own. As the artist performs the tabloid inquiry, asking the actor Kevin Spacey questions about his work and private life, Spooner’s work becomes an investigation into public performance and artistic labour.

This is writing without the painful affect (without the ‘mournful knots of ink’). Joining Spooner’s group, Beatriz Olabarrieta’s projections of fuzzy verbal material show language to be an automated substance, and writing a performance; in the same way as Jesper List Thomsen’s series of seven paintings The boys the girls and the political (2015) reimagines writing as a staged, synthetic event. And in the environmental collage that includes the video the tourist trap (2015), Richard Sides culls the language of advertising and repositions it in a bawdy critical context, performing its subject matter.

In And the Wanderers Wandering at the Wonders of Themselves (2015), Alice Theobald studies the ways in which our speech is constructed and performed: across three films shown on three monitors, we encounter a man and a woman walking around a London square, performing a conversation. And revealing the reality of the artifice (the verbal gestures and the film itself), each film has been cut and edited to expose one of the other camerawomen. The work depicts a curiously banal meeting that calls to mind the banality of those blue marks, and the everyday urge to make (immaterial) contact. I think of Miró’s 1925 This is the Colour of My Dreams, with its similar blue patch – a prophetic vision of our daily ‘fill’ of blue.

A review of the Hannah Collins retrospective at Camden Arts Centre, published in Art Monthly, September 2015
Next Review