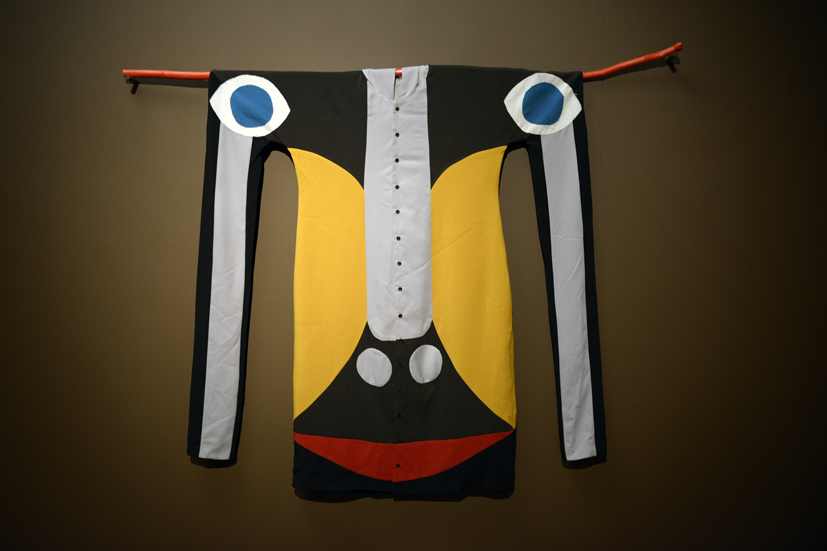 An inky scrawl, that just about reads ‘Z’, has been scratched across the book’s jacket in one feverish motion: a hieroglyphic structure that calls to mind the bending shape of Tatlin’s tower. This is the cover of the 1961 first edition of William Burroughs’s The Soft Machine. By 1966, the calligraphy had softened up, its forms curved as opposed to jagged; and by the time John Calder published it in Britain in 1968, the mood was all out psychedelic. The changing covers of Burroughs’s novel reflect the flux state of its prose: the first three editions of The Soft Machine differ widely in their cut-up formations. His writing was in a constant state of assembly: as friends annotated dog-eared manuscripts; as printers dictated the arbitrary order of Naked Lunch (1959); and as the spiralling overspill from this abject book became the next three novels (The Soft Machine being the first of The Nova or Cut-up Trilogy), the process of making this verbal material was as frantic and bodily as how it felt to read it.

Jonathan Baldock’s eponymous installation, currently showing at Chapter in Cardiff, is similarly corporeal: a compartmentalization of bodily forms that gradually mutate from one to the next. A patchwork of sculpture, costume and objects, it is one work, like Burroughs’s ‘one’ novel, but it has been pieced together from a collage of cut-ups. Baldock’s ‘The Soft Machine’ makes a nod to its literary namesake in form, as seen in the stitched together fabric-fragments, but also in content. As Burroughs’s novel traces a peripatetic journey through time and place, crisscrossing through Mexico, Panama and the Mayan Empire, Baldock’s objects appear similarly archaeological, like the ‘Mayan artifacts and codices’ that moved through the brain of the novel’s narrator ‘like animated cartoons’. Over and above narrative setting however, it is the human body – what Burroughs calls ‘soft night flesh’ – that thematically links both artists. In novel and artwork, this material vessel is sculpted beyond recognition.

The novel features a changing cast of ‘Crab men’ and ‘Cannibal Trog Women’, and Baldock’s installation stars equally mad characters: the first one I meet is a stuffed, white and headless tribesperson, with a tubular torso and reeds sticking out of its head like a crown. It looks suspiciously like the cover illustration of the 1973 edition of the novel – robbed from Dali’s Metamorphosis of Narcissus – with its witchy digits shooting out of the ground, and egg balancing on top, giving birth to a daisy. Baldock’s felted metropolis is just as anthropomorphic: a world apart, where humans have been splintered and malformed, made into puppets of mythic fantasy. Many of these padded protagonists have been stripped of any familiar features, so what we are left with are mere suggestions, or extensions, of the human body: malleable and morphic, permeable prosthetics.

The environment is primal, with scatterings of mythic hand tools and woven masks interspersed with the androgynous creatures that use them. In Burroughs’s novel, the soft machine is a synonym for the human body invaded by synthetics and surveillance; in Baldock’s artwork, the soft machine corresponds to the corporeal triggers on show, with their intestinal pipes and organ-oblongs, and the materials from which they are made. Reminiscent of Marvin Gaye Chetwynd’s Rabelaisian happenings and homespun costumes, Baldock’s work is a soft and squidgy theatre-set for the uncensored. The word ‘soft’ invokes another meaning, however: one related to its source material and compound sculptures. We are in a space of pliable semantics, where syntax and language is multiple and hybrid. The ‘Soft Machine’ is fiction embodied; it is a space of imagination, and licentious narrative, whereby Baldock’s stitched circles and gaping orifices perform as thresholds into a storytelling space. It is not only Burroughs, nor Baldock, that is penning this dream: the viewer too, has the power to reconnect the pieces of the puzzle.

Stepping into Baldock’s sculptural village, he or she is met with an eclectic bunch of performers: a pair of elephantine habitants, downy and deflated, sit forlorn on the gallery floor, while wall-hugging nipples are more expectant. Arranged as one vast rainbow frieze, Baldock’s carnivalesque fantasy is close in spirit and structure to the costumes and stage-sets of Picasso’s ballet, Parade (1917), where the human body was carved into cubist mechanics. And in Baldock’s work, the human body is warped, extended out of itself, into the space of sculpture: the space of fiction. From the phallic spears strewn across the gallery floor, to vivisected stuffed arms, Baldock’s textile talismans are things to be played with and on: invitations to rule-break. Coming face-to-face with the inhabitants of the artist’s metropolis, the ‘carnival city’ of Burroughs’s novel, feels like a metaphor for Baldock’s artwork, feverishly scrawled.

A review of the cross-temporal, group exhibition at Nottingham Contemporary, ‘Aquatopia’, published in frieze, October 2013
Next Review

A review of Rachel Maclean’s show at Rowing in London, published in frieze, March 2015