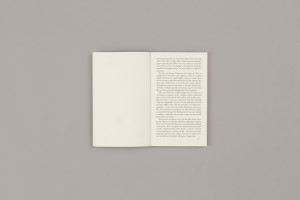 Cally Spooner, Collapsing in Parts, 2012. Image courtesy of the artist and Mousse Publishing.

I’m looking at two actors on a screen. They’re rehearsing for something, though it’s difficult to grasp what exactly – a play without narrative perhaps, where layers of speech replace fake realist coincidences. Nothing really happens; plot is pulverized, narrative is frayed; words are disassembled for the sake of open-ended interpretation. The ‘happening’ is the spoken word itself: language as event. Uniting text and flesh in a rhythmically disruptive register, this spoken-word performance is as dark and unknowable as Antonin Artaud’s revolutionary ‘Theatre of Cruelty’, which sought a ‘naked theatre language’ of sensual reality. Whispers collide with post-Beat howls; voices reverberate around the room, filling the spatial gap. The performance was filmed in an anonymous studio and is being screened in a space just as black, a haunting mirror.

Cally Spooner is an artist who writes, though neither in the narcissistic, confessional mode nor the default position of angular art-writing. Instead, her work makes the verbal visual and vocal; it highlights the viscerality of writing as an invitation to action. As the late British writer Christine Brooke-Rose opined in Amalgamemnon (1984), writing must be ‘vocal not equivocal’. The young London-based artist makes fiction active, helps it work in collective factions. Collapsing into parts, bodily and linguistic, the words attack the static spectator. She uses theory as an alibi, appropriates has-been voices as a mode of activity.

Writers and artists have always trespassed each other’s cultural boundaries: William S. Burroughs applied his cut-up mode of writing to abstract painting, while Warhol was desperate to write a ‘bad’ novel (and succeeded). But history-makers prefer taxonomies: they remember Warhol as an artist and Burroughs as a writer – Naked Lunch (1959) being his object of remembrance stripped bare, cut up and vulnerable. The artist’s novel has slowly become a medium of its own, the page a site of ideas. This was recently embodied in the collectively authored text by Bernadette Corporation, Reena Spaulings (2005), or in Matias Faldbakken’s nihilistic Unfun (2008). Spooner similarly plays with the writerly disguise, dresses text up in fluxing notations. (The body of the text.)

Spooner’s first feature-length film, Collapsing in Parts (2012), which was shown at and commissioned by International Project Space, is the documentary culmination of a long-term project she began at the university-affiliated gallery in June 2011. The project focused on the writing of a novella, which also takes the name Collapsing in Parts, published episodically online, and decorated by a series of what Spooner called live ‘Footnote’ events that sought to push the interior act of writing into more discursive realms of public performance. Footnote two, for instance, titled ‘The Erotics of Public Possibility’, started as a conversation at a breakfast table, tidbits of domestic debate, before being transcribed, typeset and illustrated into a poster, then distributed as a live event by post. Sharing information, sharing words, like the best mail art (or cleverest social network), Spooner’s work explores the relationship between the home and its political insides.

Shot in a single take, the film itself contains fragments of prose, dialogue and gesture culled from the original e-fiction; spoken by two actors in differing dialects and accelerated breathing patterns, the linguistic stuff collides with the physical. Words are revealed as mobile objects, gestural eruptions that pierce the everydayness of life – like the body itself. The script, which time-travels across history, resting in moments of economic recession (‘It’s 1764 and speaking is in the decline’; ‘It’s 1957 and it’s raining’) is both ghostly and contemporary: Spooner detours the past to make an absurd fiction of the present. Tiger Woods eyeballs Ronald Reagan, as decades collide. Their frantic rhetoric fractures long durations of silence; the pause becomes a powerhouse.

Shown alongside the film was a photographic print of a torn-to-pieces David Cameron performing his Tory conference speech (Untitled, 2012). The collage as polemic or oratory as patchwork. The political performance is exposed as a vessel of information, a cryptic concerto of words that needs decoding. It is demanding, difficult to bear, full of cliché and intertext – like a work of Modernist fiction, or Spooner’s own played-out novel. But her art of formal cuts (and corporeal cut-ups) is a parody of Cameron’s scripted ‘poetics’; putting the body in the frame, Spooner draws back the curtain to expose life as one big rehearsal.

A review of the Cindy Sherman-focused, group show at Spruth Magers in London, published in frieze, April 2013