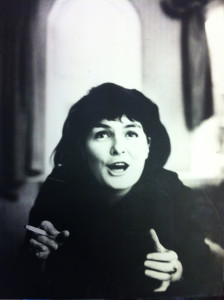 I could’ve been sick before this talk I was so nervous. It’s been a while since I’ve spoken in public. I was worried if I was going to do it right. But of course I wrote this confession a whole three weeks before today, knowing that it’s really just a performance: of writing, confession and correspondence. As Chris Kraus writes in the essay ‘Continuity’: ‘Perhaps for “female writing” you could substitute the phrase “performative texts” – the text being like a live performance, not a text OF a performance, but the real thing. A text that is both live and lived.’¹ In this game of substitutes, swap vomit for writing. Ti Grace Atkinson talked about eating one’s own kind, so I’ve ingested Chris, Dodie, Eileen and Ann; eaten their writing in an act of feminist cannibalism.

Their words will return, as I write letters ‘to’ them.

What does it mean to do it ‘right’ anyway?

Dear Eileen, you did it wrong too, didn’t you, when you wrote that political sestina and forgot what was fixed – the six word structure? I love how the scene of writing the bad sestina becomes the scene of writing for the essay we are reading, as if that badness is an extension of what has come before: limitless, excessive, writing feeding writing, as you perform the barf of the title.

In the Eileen Myles anthology The Importance of Being Iceland (2009), the essay ‘Everyday Barf’ is located in the ‘Talks’ section, which makes sense given its oral musicality. Something that is both ‘live’ and ‘lived’. It begins with the writing of a poem, and ends with the writing of a poem, self-referential bookends to a loose narrative of Eileen not doing enough to spend time with her ‘mom’. But really it’s all so intimately related: the personal, private work of the family, and the work of writing the text we are reading. It’s processual. She’s figuring it out as she goes, releasing the intimate into public language. As Marguerite Duras wrote in the verb-led book Writing: ‘Write all the same, in spite of despair. No: with despair.’²

scrolling the banal babe, in the work of Clunie Reid

I was invited to contribute a text on the work of Clunie Reid to accompany newly commissioned works by the artist for the Photoworks Annual, themed ‘Women’