Scrolling you, and the cold descriptors 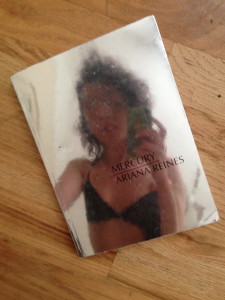 Dear AR, I’m reading your blog again; haven’t done for months. I am thinking about the ways the life is performed and edited in different contexts; how we blog the body and biography, and make it artifice: which made me think of you.

And now I’m scrolling you. Down. Up. From 2012-2015. I’m unrolling you like a spool, or a parchment, made of ink. You cannibalize Marguerite Duras, Ana Mendieta, Yoko Ono and Ellen Cantor, and now this text is going to cannibalize you. I mean it in an affectionate way, for our sisters help us write.

This text is going to scroll, like Tumblr. A letter to you, and a letter to life-writing. Remember when Carolee Schneeman pulled that Interior Scroll from her vagina and read the poem aloud? Is that what you’re doing?

In her book of poems Mercury, Ariana Reines writes with the ‘I’, just like she does online, when she talks about her mother, and Madonna, La Isla Bonita: ‘this is the first video i ever saw in my life, at 376 essex street in salem’. But IRL confession, this is not. She performs confession not as candid vulnerable exposure, but as a matter of poetic artifice and feminist trickery.

Hannah Wilke made herself similarly visible in the S.O.S self-portraits, but the gaze is so fake, the poses so constructed: she works herSELF into an object of performance. As Chris Kraus indicates in the epistolary novel I Love Dick: ‘[she] started using the impossibility of her life, her artwork, and career as material… As if Hannah Wilke was not brilliantly feeding back her audience’s prejudice and fear, inviting them to join her for a naked lunch.’

Ariana, as character and poet, is just as powerful ‘naked’. She pulls the strings and generates verbal material out of bodily desire. The three spare words of ‘I love you’ take up one whole page on page 113 in the long fragmented epic ‘Save The World’. Three morphemes make a confession (or a cliché), but here it is contextualised by the book we are reading: a blank arena of inscription, where sex, body and emotion is drawn from, and then shot to pieces – to make way for the written performance. The confessional ‘I’ is a conceit, a phonetic flimsy thing. Disappointing the Ariana-desiring reader, on the following page Reines the poet emerge: ‘A woman writing poems / Produces effects / Cold descriptors’.

Monograph on the performance practice of the British artist Cally Spooner, published in frieze, May 2014
Next Essay