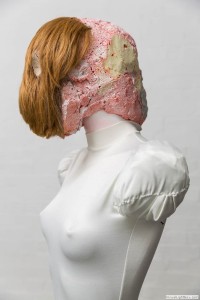 5. HEADLESS PERFORMANCE, AND SOUNDING THE UNKNOWN

To travel, in language, from the linear logos to the unpredictable body involves a forgetting of oneself. It means performance, a switching of roles, a trying-on of heads – as you lose your own. Perhaps this is why Kathy writes as Psyche, or Heléne writes as Medusa: the decapitated’s masquerade. And perhaps why Kate Lyddon’s sculpture of a pink clay cranium is defaced with synthetic auburn hair in Unfolding Aphrodite (2015). When woman has been mapped out by myth to behave, to be neat, to not talk out of turn (or executed for doing so); we might as well experiment with the freedom of performance and revel in the artifice; we might as well cut off our own head out of choice, and speak, write, scream, sick, as another. Decapitation does not always equal death; it can also equal life – a different one from what has come before – on stage, page, plinth, wall, or in the imagination.

Lyddon’s sculptures speak for the silenced Skull of a Young Girl Modeled in Plaster, as the decapitated head is re-appropriated as oppositional female grotesque. And in the Exorcism of Burning Sentiment (2015) video, a soundtrack of manically sung nursery rhyme interspersed with violent retching (akin to the splurting language of the hysteric), accompanies images of the artist’s hairy executions and plagiarized images of non-hairy (similarly grotesque) airbrushed models. As Mary Russo explains in The Female Grotesque, while the classical body is ‘monumental’ and ‘self-contained’; the grotesque body is ‘open, protruding, irregular, secreting, multiple, and changing’.¹ Lyddon’s characters emBODY and fulfill this carnivalesque subjectivity.

Through drawing, film and mainly sculpture, the artist shows selfhood in a compartmentalised state, revolving, accreting and excreting: never static or whole: as the performance takes over. Two Heads Good, the subtitle of the exhibition, encapsulates this feminist tactic of decapitated, multiplicitous masquerade. I imagine Kathy Acker would have fun here, in this alternate world, where heads are chopped from body. She liked riding choppers, too, black and inky – like the glazed ceramic head of Lyddon’s Automatic Spiral of Hate (Composition I) (2015). She (the sculpture) has a lacerated skull with knotted tissue spilling from its centre, while her face looks as if it has been tarred, eyes blinded, all of her expression and affect painted over to ‘smooth’.

But even if she cannot talk through the tar, her body can, insofar as it has become disconnected from the linear and lawful mind, and set free to wander. A plinth has been painted black, its front-facing sides bearing the visceral strokes of corporeal suggestion. Two fragments of painted ceramic, belonging to a separate head, become two nipples. Her hands are centred on her cunt – which is where the language would come from if these headless hysterics were to write their own histories. Forget Ovid, but remember Acker: when listing ‘The Languages of the Body’, at number four she wrote: ‘The languages of this material body: laughter, silence, screaming’; and later: ‘Let one of art criticism’s languages be silence so that we can hear the sounds of the body: the winds and voices of far-off shores, the sounds of the unknown.’

In Lyddon’s tribe of decapitated misfits, skulls are masked, cast and painted – layered with process and artifice. As identities become severed, vivisected and displaced, with the switching of heads and bodies, and the collaging of material, the unified subjectivity traditionally proffered by the classical head becomes a distant memory. And with these serial decapitations, the femininity produced by the patriarchal myth-makers is also forgotten, as we encounter the androgynous heads of lime-green creatures. Their glazed faces are lined with emotion, but these are not happy real life wrinkles. Instead, as decapitated Medusas, they bear the artificial inscriptions of anger, violence and vengeful laughter.

Scrolling you, and the cold descriptors

Exhibition text on the poetry of Ariana Reines, running parallel to the themes of the exhibition Strange Attraction at APT Gallery in London, March 2015
Next Essay

An essay for the Irish literary journal gorse that considers the legacy of the work of British avant-garde novelist Ann Quin in contemporary women’s experimental writing, from Kathy Acker to Dodie Bellamy